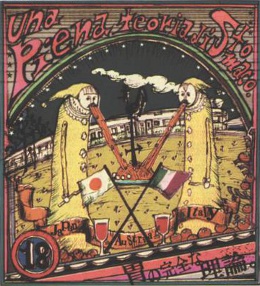 You know, I can’t say I’m all that surprised it turned out this way.

As I write this, I am on a couchette, a six-person compartment in second class, which as you can imagine is extremely cramped. There are two triple-bunk beds, of which I have one of the beds on the very bottom. There is not enough room to even sit up, and with the bottom being the narrowest of the three, I feel I’ve drawn the short straw. Not that it bothers me, as I have been both nervous and a little excited wondering about who else will be traveling with me in this shared room. I was informed that I could choose a gender-segregated compartment, so before making a reservation I requested a women-only room. Yet at the moment I am alone with a middle-aged Colombian man.

…Well, I did prepare myself for something like this, but it’s still not what I would prefer. Thankfully, after talking with him he seems like a nice person, and as he also seems to be feeling the same awkwardness that I am, it would appear we’re in the same boat….

Now then, I have tarried in my introduction. Right now, I am in the middle of fulfilling my resolution to travel solo across Europe. I have reached the eleventh day since leaving Japan. The events of this trip will likely become this column’s focus for the next few issues.

The first entry for “Thoughts on a Full Stomach” was entitled “Consume the World!” Fueled by a desire to sample with my own eyes and my own ears the people, cultures, and scenery in every part of the world, I have always had since my childhood a fondness for traveling. We live in an age when television and the internet make it possible to know global news in real time, without having to leave your home. But what do you suppose it’s really like? Do you sometimes doubt whether it’s OK to merely accept as truth what someone else presents and thereby presume that you have learned all there is to know?

As an example, I have heard many say that “the food in the U.K. tastes bad,” but I have been there several times and have yet to come across something that really does taste bad. When you think about it, even Tōkyō has its share of bad restaurants, and I have been to several that have prompted me to think I made a poor choice, so should not a similar ratio hold for the U.K.? I was once asked by a foreigner, “Japanese women help their husbands dress and even put on their socks for them, right?” Impressions can be dangerous.

A long time ago in school, I would hear someone say that “So-and-so has an awful personality,” and though I didn’t know much about the girl in question, I would start to see her that way. But after actually having a conversation with her we got along very well and became the best of friends. Having too much information before you make a judgment as to what you like, what you hate, what kind of person someone is, and how you feel can be a convenience or a nuisance, and there is a fine line between the two. On this trip, what will I myself discover, and what will I think? I hope I can savor each thing on its own. Still, my first experience on a night train has been a series of surprises. Just now, we stopped at a station and picked up another passenger, who, as expected, is a man. Eleven hours until I reach my destination. …In the meantime, I’ll say good-night.