Clover Moon and a White Guitar 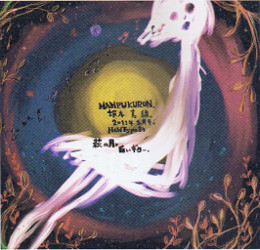 Summer vacation in fifth grade: filing into the classroom with my fellow students on the first day of school after a long time away, everyone looked different than usual. Even our class teacher, who we affectionately called by his nickname of Kakkii, was in full vacation mode, his features softened by the hint of a smile. So it was that Kakkii, at the end of homeroom and with the insistent prologue of, “You have to keep this secret from the other classes―absolutely no telling!” produced a box of Clover Moon.

Kakkii was a new teacher freshly graduated from an athletics university in Sendai. He was just 25 at the time, and he showered his first class of pupils with generous affection. A man who left no one doubting he played rugby in university, he was the very picture of a devoted teacher. His anger and laughter came with equal fervency, and when he made the occasional mistake he would sink into silence, his face flushed red. To us he was like a much older big brother, and among the mothers of the PTA he was a popular figure of “adorable” repute.

The Clover Moon was a souvenir Kakkii brought back after returning to Sendai for summer vacation. It was a rare confection the likes of which we Tōkyō-ites had never laid eyes on. And the luxurious sight of how each one was carefully placed in its own box sent the children’s excitement through the roof! The class erupted in shouts of glee. Perhaps bringing sweets to class and handing them out was actually against the rules. I can still recall clearly the sight of him waving his hands frantically and shouting, “Shh! Quiet down!” with his face tinged red again. As he surveyed our delighted reaction, he said, “I figured you guys had probably never had this before,” with a playful gleam in his eyes.

I have many memories of spending time with Kakkii. Such as the time when I was the only one who had trouble keeping up with everyone else on a sewing assigment in home economics, and he stayed after school until sunset to help me. Though for much of the last half the needle was in his hand as he pointed out in surprise, “Hey, this is your homework, you know. Why am I the only one working on it?” in the end he did almost all of it.

There was always a white acoustic guitar sitting in the classroom. We often sang as a class to his accompaniment. Despite his youth, Kakkii’s repertoire was limited to old classics such as “Blue Triangle” and “Princess Kaguya”. To students who said, “We don’t know that song!” he replied, “It’s a good one, so learn it!” and proceeded to sing it himself and teach us the words. In spite of my age, I had loved such classic songs since I was young, and so I knew nearly all of his favorites. So I sang louder than anyone.

This year I made my first attempt at a cover release. When choosing songs, as I pictured which songs I wanted to sing, everything I came up with was an old classic. Even though each one was popular before I was born they reminded me of old times, and I was puzzled by the memories of the smell of swimming pools in summer which they, for whatever reason, brought to mind. Thinking about it, it may be that they bring back my memories of those days of singing classic songs at the top of my lungs together with Kakkii.

Having surpassed Kakkii’s age in those days, I am doing what I love for my job. Though I am still as clumsy as ever, I am giving it my all. Teacher, are you still as devoted today as you were then? I couldn’t ask for more.