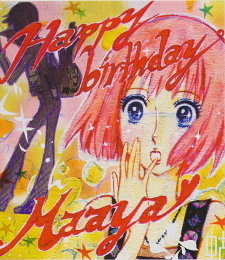 In my neighborhood there is a dream of an Italian restaurant which not only serves superbly delicious food, but also has a staff composed entirely of handsome men. Just three people work there, but each has his own particular charm—the manager with his wild streak, the young chef whose looks could make him an actor, and the heartwarming little apprentice. It is the sort of unrealistic setting that shows up all the time in comics written for girls, and yet there it is. Though a man who can cook is already attractive as it is, the other day I discovered something that tallied even more points in my book: the apprentice’s everyday clothes.

Normally when I’m there for a meal I only see them in their white chef’s coats, but that day I caught sight of the apprentice on his way home after closing. With his height seeming to reach beyond 180 centimeters [5′11″], he has the very aura of a model, and as I watched he crossed in front of me, gracefully maneuvering his bicycle. His everyday clothes were—and I realize putting it this way is terribly rude—not the sort of thing one could call attractive. But this won’t keep me from shouting: that’s the way it should be!!

Because his passion for his work is too intense for him to think about anything else, the color and cut of his clothes matters not in the least to him. If he can afford to buy clothes or shoes, he’ll use the money to buy a high-quality cooking utensil he can use for a lifetime. Despite coming home exhausted from being on his feet all day at work, he stays up late to polish his cooking skills in his studio apartment’s tiny kitchen, and is the sort of 25-year-old (my guess) who boils pasta even in his dreams. Although, this is all a flight of fancy on my part. As I watched him pedal away, I gave a cheer for him in my heart—Hang in there; I’m pulling for you!

In my younger days I dreamed of becoming the wife of a confectioner, a sushi chef, or some craftsman of a traditional art. The kind of wife who (dons an apron and) gently supports her husband as he devotes his entire life to a single pursuit, holding to pride and principle as he pursues perfection. Every time I pictured that ideal husband, the quality of having “poor taste in everyday clothes” always slipped into the frame.

When I was in school I was witness to many cases of girls meeting boys they had only ever seen in their school uniform and becoming instantly disenchanted with their street clothes. I can also understand the logic of girls who can’t stand it when their date shows up poorly dressed. But I actually find those men who show little concern for their clothes attractive. So attractive that a long time ago, when I went on a date with a guy who tucked his shirt into his jeans, I even found that quality charming. When I see someone who puts too much effort into his looks, it has the opposite effect of making me wonder whether it comes from a lack of self-confidence. It disappoints me to see people fretting over their reflection in the train window or the elevator mirror, yet these days the number of young men who do this is growing by leaps and bounds. These are trying times in which to live.

But the number of women who share this philosophy is surprisingly small, and it would seem that everyone tends to prefer fashionable men. At the moment I have yet to find any girls who concur with me when I say, “You know, if you go after the ultimate in manliness, you’ll eventually reach Ken Takakura, don’t you think?” I turn 30 this month. I couldn’t ask for more.