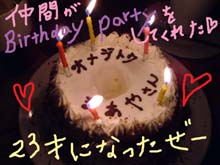 My apologies for the delay in updating. It’s just that I’ve been under a constant siege of work. But I was so swamped that I was able to get two whole days off the day before yesterday, and I’m already recharged and ready to go! Haha.

Now as for exactly why I’ve been so busy, well, that would be because I’m in the middle of working on that new Maaya Sakamoto album you’ve all been waiting for. Plus, rehearsals for the musical I’m appearing in this summer have already begun, so my week runs something like recording, rehearsals, radio, recording, rehearsals, rehearsals, songwriting. In the middle of all this I had my 23rd birthday, my new single “tune the rainbow” went on sale, and the cherry trees traded their blossoms for new leaves. I’m sure this season is the start of a new phase of life for many of you. What did you graduate from this spring?

The day I graduated from junior high, my homeroom teacher said something like this:

“You’ve all spent a wonderful time here. But there are things you have to forget. Things you must change. Time passes on with each day. You mustn’t cling to the present so much that you wipe out the future’s potential. You mustn’t be afraid of change.”

At the time I didn’t really grasp what he was saying. We were in the midst of lamenting the thought of saying goodbye to our very best friends as we exchanged promises to never change—the very opposite of our teacher’s words.

Those words still resonate powerfully in my heart. And I feel that now I’ve gained a little sense of what those words mean.

We constantly change. Meetings, partings, and happenstance make us different today than who we were yesterday. It’s part of our nature. But “to change” never means “to lose”. Everything is etched in as new wrinkles.

Doesn’t it seem that for some reason “change” comes with an odd sense of guilt? We tend to say, “So-and-so’s changed,” without any thought and without knowing the person’s past. But you can only say that someone really has changed when that person picks up and leaves, roots and all. But I think that’s something that hardly ever happens.

This idea sunk in just the other day when I ran into some old friends at a wedding party for one of my junior high classmates. Each had grown up and taken different paths, and while their appearances were more or less different, when we talked I found myself thinking, “This person really hasn’t changed a bit.” Yet I felt as though we had grown more accepting of each other than back then, and I could see how the time we spent apart probably played a significant role. We were like steadily growing plants holding fast to our roots. You can put on new clothes or move to a new place, but you can’t change your roots. You can’t erase the unique color you possess. That’s why I think you don’t have to fear change. Just give everything your all and do it the way you believe it should be done. After all, you can always return to your roots.

I’ve been through several graduations, and at each place I had lifelong friends whom I treasured greatly. Friends with whom I could walk together even after we had gone our separate ways. My wish is for them to never finish changing. Besides, we’re young! We’ll take in plenty of light and water, spread our leaves further and wider, and build up our roots. It’s we—the young generation—who will support the world’s future.