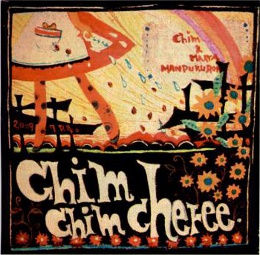 At times when I am feeling really down or stuck in bed with a cold, I am sure to have the same dream: a dream of Chim, a hamster I kept long ago, darting to and fro at my feet.

Chim’s somewhat odd name comes from “Chim Chim Cheree”, a song from a beloved movie of mine, “Mary Poppins”. He was a present for my tenth birthday, bought by my parents after my earnest pleading.

I found Chim in a pet store cage, sitting all by his lonesome while numerous other newborn hamsters scrunched together like dango. His mottled white and pale gray coat was bland like a cow’s. There was something about him that I loved. I was sure he was the one, but when I announced my choice, the store employee said, “He’s not very lively, so there’s a chance he might not live long. How about picking one that looks stronger?” Hmm, so that’s how you tell, I thought, and I took a long look at the others…but there was still something about Chim that I loved. It wasn’t based on reason, but I felt as if it was obvious that he would go home with me.

Following his arrival in the Sakamoto house, Chim flourished. I felt sorry to confine him to his cage, so for one or two hours a day I let him loose in the living room. Free to do whatever he wished, he squeezed his tiny body through the room’s every nook and cranny, exercised his burrowing instincts by gnawing clear through the fusuma, but raising him in this unconstrained manner meant he never once bit anyone, and he grew up to be a gentle and kind hamster.

Three years later, in the spring of my first year in junior high, Chim started to go straight back to his bed when I let him out of his cage. I had a hard time accepting the reality that our time together was growing short. Able to do no more than stroke his fur as he grew more and more listless with each day, I felt powerless. I couldn’t imagine life without him….

And then one day, when I returned from school and looked in on Chim, I found him lying limply on his side. He had been like that for several days, but that day something was different. When I gently cradled him in my hands and lifted him out, he opened his eyes a tiny bit and looked toward me. In the time that followed, he slowly drew his last breaths.

I was heartbroken. But it was honorable of him to put off going to heaven until his owner returned. He amazingly defied the prediction of the lady at the pet store, and gave everything he had in his long life. To me, Chim was like a little brother, like a best friend, and like a first love. Since that time I have never felt like keeping another pet.

But when I am feeling a little troubled…like yesterday, for instance. He appeared in my dreams, his cheeks stuffed full of sunflower seeds, his plump posterior bobbing this way and that as he ran in circles around me. It’s good to see you again…as this thought crossed my mind, I awoke. He’s not here anymore, yet he is. At four o’clock in the morning, I had a vague insight that a life exchanged for love, though unseen, always stays with you. And with that, I went back to sleep.