Much Ado About Eel 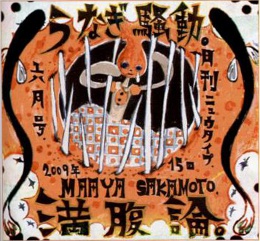 Eel is one of my most favorite foods.

In March I spent about three weeks in Nagoya while on tour with the musical “Les Misérables”. I took that chance to fulfill my dream of eating at the restaurant that originated hitsumabushi, Atsuta Hōraiken. The awe-inspiring flavor did not disappoint, with a crisp, fragrant outside and juicy, sauce-infused inside…. And it was eel all the way down! Not merely draped over rice, but packed to the gills with eel. To draw an analogy, it was like a faucet that yields juice with just a twist, or a pocket that grants a cookie with just a pat—it was such an ideal quantity of eel as would appear in one’s dreams. Ahh, I’m so glad I went.

But my love of eel did not begin until I reached adulthood, and to tell the truth, a traumatic event kept me from eating eel for quite some time. To tell of that event I will have to turn the page back to my junior high days.

I was certainly not the type of student who was gifted at studying, and so I was the sort of slacker who scraped by on all-nighters and cramming sessions. As such, on nights before a test I always burned the midnight oil.

One such late night during my second year of junior high, as I fought off drowsiness while studying Japanese history, my mother brought me a bowl of katsudon.

As I ate my eel and sank into intense meditation on years and names…something didn’t feel right in my throat. Apparently a bone had lodged itself there. At first I assumed it would eventually work itself free and tried to drink it down with water, but it turned out to be more stubborn, and more painful, than I thought. It bothered me to the point that I could no longer focus on my studies.

Seeing this commotion, my father joined in. “I bet I can take out that bone!” He brought out a pair of disposable chopsticks and had at my throat. I let out a wail. What else did you think would happen, Dad? By this time it was two in the morning. The pain and panic over my impending test had me on the verge of tears.

We were down to our last resort. To the hospital. When we explained the situation to the otolaryngologist on the night shift, practically before the words “I see” came out of his mouth, he had slipped a long, narrow forceps into my throat and extracted the bone…and that was that. The bone we spent hours fighting was gone in a mere 30 seconds at the hospital. After-hours treatment fee: 3,000 yen. Study time lost: three hours. Length of the stuck bone: two centimeters. Inexpressible anger and frustration: priceless. For a short time after that, eel was one of my despised foods. Yet today I absolutely love it. I guess this is a story about how even the most painful memories eventually fade over time! I couldn’t ask for more.

Translation Note: The “magic pocket” which Maaya mentions refers to a song written by the poet Michio Ishida (pen name: Michio Mado) in 1954.