I Wish I Could Have It Once More

Part 7
Part 9
Part 8 of 34 in a series:
Maaya Sakamoto's Thoughts on a Full Stomach 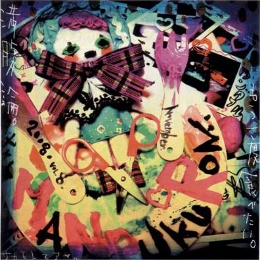 I am all too familiar with being unable to ever eat again those foods I wish I could have once more someday.

I was 20. Some friends who knew my fondness for peaches once went all the way to Yamanashi to pick peaches with their own hands, and gave them to me as a gift, cutely wrapped in a round hat box. The sweetness and juicyness of those peaches had an excellence beyond anything I thought possible in this life. I had never until then, nor have I ever since then, come across a peach more tasty than those. In fact, since no peach I have had since then has surpassed them, I feel a lingering dissatisfaction, and I have ceased to eat peaches as much as I used to.

I was 23. I visited a tiny, isolated island in Scotland for the cover art shoot for my album “A Boy Named Alice”. In the center of Stonehenge, the midst of a flock of sheep, the middle of 360 degrees of open horizon…. It was an enjoyable three-day shoot. But the harshness of posing in thin outfits in a wind so bitterly cold it made my ears ring was brutal. Just when I thought I would freeze to death if I stayed outside a minute longer, we discovered a lodge on the corner of a pasture. Scrambling inside, we found it was a small restaurant run by an elderly couple. The simple, unadorned bean soup I had there was unbelievably delicious. As I drank it down, it filled me to the point that I could tell my soul was quivering in delight, and I felt it moment by moment transforming into energy. To put it this way may be excessive, but it was an unforgettable experience of knowing with absolute certainty that I am alive.

I was 12. I went with some neighborhood friends to the summer festival dressed in yukata, and upon returning home well after curfew, I received a stern lecture from my parents. While I hung my head in contemplation and regret, my mom brought me a warm bowl of corn soup. Thinking about it now, it may have been nothing more than instant soup. But back then, in that awkward atmosphere after getting scolded, my mom’s kindness reached me without her saying a word, and as I ate the steaming hot soup tears flowed from my eyes.

I wish I could have it once more….

To be honest, whether it’s the classy restaurants featured in magazine cover articles, full-course meals I could never pay for on my own, or famous delicacies from all over Japan, I have many opportunities in my line of work to enjoy wonderful food. But if you were to ask me about the most wonderful things I have ever eaten, the very first things that come to mind are these sorts of meals with special memories attached. Even now, if I close my eyes, I have a feeling I could clearly recall the flavor, aroma, and even emotions of those times. But as those times recede further and further into the past, I sense the memories fading little by little, and I am left with a sense of sadness.

A meal I eat with special people and special feelings is broken down in my stomach to become my blood and muscles, and from then on it stays within me forever. I know I will never again find the same flavor, and for that reason I make it my goal to treasure each moment of today in turn. Living in contentment depends not on what I eat, but how I eat. I couldn’t ask for more.

Part 7
Part 9
Part 8 of 34 in a series:
Maaya Sakamoto's Thoughts on a Full Stomach