A Hurricane at the Dentist

Part 6
Part 8
Part 7 of 34 in a series:
Maaya Sakamoto's Thoughts on a Full Stomach 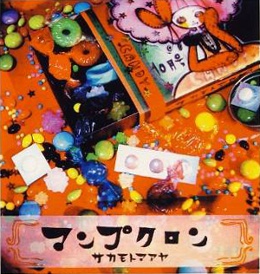 That kyuiiiiin sound, the stress of being blinded, the pain in one’s jaw from keeping one’s mouth open for a long time, the flower arrangement on the receptionist’s desk that seems to reassure you that “there’s nothing to be afraid of”…everything about it is terrifying. If I had to choose between going to the dentist and spending the night in a haunted house, the latter would win. How fitting, then, for me to get a cavity.

One day at a restaurant, as I was drinking my post-meal coffee, a waiter brought forth a curious confection, saying, “These are from Italy—would you care to have one? It may not match with a Japanese sense of taste, but over there it’s quite popular. Feel free to try one if you’d like.”

It was called something I cannot remember, looked like something in between a candy and a caramel, and had the shape of a small bean. The flavor was certainly not what I could call very good. Although when I was in Finland I once tried some of their famous salmiakki [salted liquorice] and nearly passed out, so compared to that it wasn’t so bad.

But I still felt a vague need to evacuate it from my mouth, and after giving my noncommittal opinion of, “Hmm, that’s an interesting flavor,” I decided to bite into it and swallow…and that’s when it happened. Just as I bit down, the candy stuck fast to a filling in one of my molars and the two were dislodged together.

Pretending it wasn’t there and leaving it alone for the next several months was a bad idea. By the time I gathered my courage and paid a visit to the dentist, a cavity had already formed.

Seeing me shaking like a leaf in a stiff breeze, the dentist said, “We’ll inject an anesthetic before we start the procedure, so there’s nothing to worry about, Ms. Sakamoto.” As I laid back in the chair like a fish on a chef’s cutting board I reflected on my life. Ahh, I swear I’ll never eat that sort of mystery candy ever again. When I was little I was told, “Don’t take things from strangers,” all the time. Mother, I’m sorry. I’m a bad daughter.

At that point the dentist told his assistant, “Get the Hurricane ready.”

What? Hu—Hurricane?! What’s that dreadful name for?! I can’t take that, not the Hurricane! Stop, please! Doctor, this is too scary! My mind put up a panicked fight, but the Hurricane was already in my mouth. Apparently that was the name of the instrument for administering the anesthetic. There was definitely a twinge…. But of all things, to give that horrifying name to an anesthetic…. You would think they could come up with a fancier title.

Thanks to the Hurricane my treatment concluded free of pain. But due to the rather lengthy (or so it seemed) procedure, I felt rather exhausted. As the dentist worked I thought of nothing except treating myself to some grilled eel when it was over. I’ll go to that place by the station—I put so much effort into this, so I’ll have whatever I want today. Eel, eel, eel, ee….

Like a meditative chant, I recited the call for eel in my heart. Of course I had some on the way home. I couldn’t have asked for more. However, the Hurricane’s impact made it hard to tell how it tasted…. Such a shame.

Part 6
Part 8
Part 7 of 34 in a series:
Maaya Sakamoto's Thoughts on a Full Stomach