“You can't catch me” interview 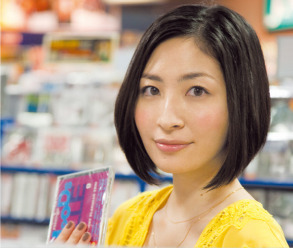 As she celebrates the 15th anniversary of her debut this year, Maaya Sakamoto’s album “You can’t catch me” is an “aggressive” disc that packs a musical gauntlet thrown down in order to press forward. On top of collaborations with a diverse group of musicians and portrayals of genuine emotion, it demonstrates a level of entertainment of the highest caliber. In it one can hear the new trajectory of this artist who continually breaks past her own limits.

Your latest release, “You can’t catch me”, comes two years after “Windreader”, your previous album. What were your thoughts as you began working on it?

“‘Windreader’, in my mind, had a strong sense of having reached a milestone. It’s not as if I was particularly conscious of my 15th anniversary, but there was something profound in it, as though I had at last reached the point I was aiming for. So I wanted to make this album one where I’m trying out a lot of new things. It’ll be released as the sixth item in my 15th anniversary commemorative project, but I’m nowhere close to concluding (laugh).”

When I listened to it, it felt pretty aggressive.

“It does, doesn’t it? (laugh) There are parts of it where I tried pushing out in so many different directions it sounds a little disorderly. Rather than tracing over what I’ve done these 15 years, I put my focus on new things. Specifically, I wrote music with people I was meeting for the first time. As I took in inspiration from outside sources I kept my eyes open for what that would produce inside me.”

“Things like asking Mr. Tokita for ‘a ballad, but with a range neither too wide nor too narrow,’ or asking Suneohair to ‘please write me an all-out rock song’—I met with each one in person to make my requests. I had long since been a fan of each of them, and since they were artists who I had been listening to for a while, it made me really happy to be able to have them work on the album. Suneo’s songs, for example, actually sound very philosophical to me, though I like that. The way he takes that and sings it refreshingly with that exhausted-sounding voice is just wonderful. For this album I also ended up asking him to write the lyrics too, so I was excited to find out whether they would fit with me when I sang them. In ‘Because of You’, the line in the first chorus that goes ‘I’m intimidated by lies’ started out as ‘I won’t be intimidated by lies’. That part never sat well with me, and when I told Suneo, ‘Instead of “won’t be”, could you maybe make it “I am intimidated”?’ he said, ‘I wrote “am intimidated” at first, but I thought that Maaya Sakamoto probably shouldn’t be intimidated by lies, so I changed it,’ and I got him to change it back to ‘I am intimidated’. All through getting to work with so many people on this album, I was grateful that everyone came in with their own idea of who Maaya Sakamoto is. The process of keeping our focus on a shared direction while we shared our thoughts with each other was really enjoyable.”

I see. In the songs you wrote yourself as well, it feels like you’re writing more openly than you ever have about such raw, intense things from the bottom of your heart like desire, instinct, impulse, and passion.

“I think maybe my actual feelings at thirty are coming through. I’m not as grown up as I could be, but I’m also not a child. Ever since I was 16, adults have used the word ‘life-size’ as a tagline to describe me, but I really didn’t get what they meant by ‘life-size’. But with this album, I have a definite feeling that it’s turned out as a ‘life-size’ release from a 30-year-old woman.”

“It is. I have a feeling those two lines work their way through the entire album. Since my teens, the most popular songs I’ve sung have usually been the the positive, encouraging ones, and those are the lyrics I’ve written. But on the other hand, reality is a place where love sometimes doesn’t work out, or dreams sometimes don’t come true. So instead of being depressed, I wanted to think to myself about what I should do when that’s the perfectly normal way for things to go.

“For this album I’m singing about things I don’t want to show others, like desire and jealousy, and also about giving up all hope and trying to force a relationship to work—those kinds of elemental feelings. Everyone goes through life trying not to show those things, but sometimes intense emotions you can’t hide can push you forward. Feelings that you want to hide from people but can’t deny they’re there—I wanted to sing about emotions that are usually tough to put into song, and part of it was that I wanted to challenge myself to see if I could package that as a form of entertainment.”

Now that you’ve finished production, what are your feelings?

“I have a feeling that until now, I’ve always been praised for that optimistic, good-little-girl side of me. But I wanted people to relate with me on a different level, and this release comes from thinking that maybe now I can express that side, too. When I tried this a long time ago, I typically sunk into introspection, and since those songs tended to be the kind that would leave even the listener depressed, I tossed all of them. As a result, only the light, dry side was left. But now I think maybe I can stay with that dry tone and avoid leaving the listeners depressed as I take my emotions that I haven’t been able to sing about in an entertaining way until now and put them to music. The feeling I get from this album is that I was able to step up to that challenge.”

What feelings did you put into the title “You can’t catch me”?

“Part of it is that this album ‘might be something no one is imagining it will be,’ and there’s also the idea that even I can’t catch myself. Having made this album I’ve caught sight of other things I want to do, and though it is my 15th anniversary, I’m going to keep on running for a long time from here.”