Gyūdon, O How I Love Thee 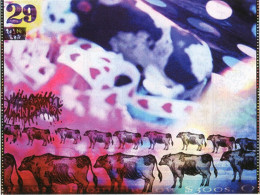 Yesterday. On the way home from work, my feet dragging from exhaustion and my stomach growling from hunger, my only wish as I walked was to quickly find something to eat and go home to crash. I’d take anything for dinner, even convenience-store onigiri…but as this thought crossed my mind, I suddenly recalled the image of a brightly flashing red and yellow logo.

Right—if I turn at that corner right there, there should be a Sukiya, that restaurant of my dreams!

I had always passed by establishments in the Sukiya chain of leaf mustard/pollack/mayo gyūdon”, which, as I think about it now, seems a sudden step down the path to the dark side, but so impressed was I on that day that it was akin to the impact of a direct blow to the head from one of those giant plastic toy hammers. It was incredibly good…. Cheap, yummy, and open 24 hours. Beyond those doors lay an entire world I had never seen.

Ever since, I have become such a big fan of Sukiya that when I spot one from the car window, I involuntarily say, “Ah, a Sukiya.” I would give anything to eat there again. But thus far I have almost never set foot in a gyūdon chain restaurant. So I have not the courage to go in on my own, nor the courage to arrange to eat out with a friend and reply to their excited inquiry of “What do you want to have?” with “Sukiya gyūdon!” The right timing slips away, and in my entire life I have only had Sukiya twice. This frustration of loving something yet being unable to draw near—at last, tonight may be the night when my suffering is rewarded!

“See you tomorrow,” my manager said just as we were about to part ways, but I summoned my courage and stopped her when I confessed, “I want to pick up some gyūdon before heading home, so don’t leave yet.” “Gyūdon?!” She seemed quite shocked. And as well she should—in all these years of spending nearly every day with each other, she has never once seen me eating gyūdon. “I wonder if there’s a place nearby…there’s a Yoshinoya near the station―” “No, I want to go to Sukiya. There’s one just around that corner.” After three years of looking out from car windows, the Sukiya map engraved in my mind is precise. Just as I thought, there it was, on the corner.

Though I took the utmost care that my unfamiliarity with the place would go unnoticed, I had no sooner entered the restaurant than I ineptly asked, “Can I order something to go?” “Yes,” came the reply, in a tone that said, You expected otherwise? So much for that. I placed my order, paid, and was just about to settle into a seat to wait…when it was done! Like that! I didn’t even have time to sit down. What magic. The flavor for which I had waited so long was, needless to say, without equal. I couldn’t have asked for more. I wonder when I’ll be able to have it again….

Translation note: The “giant plastic toy hammer” Maaya speaks of is called a “piko-piko hammer” in Japanese. I could try to describe it, but it’s easier to ask Google to find pictures.