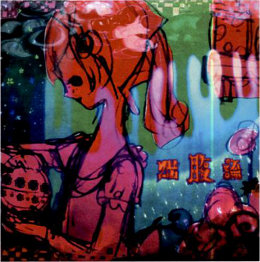 During the month I spent traveling alone across Europe last year, I must admit there were several times when I longed for Japanese food and bought something sushi-like. In any metropolis I could count on finding packets of sushi-like products in the large supermarkets. However, “-like” is the most I can say about any of them, as something was just not quite right—the rice lacked vinegar, for example, or it was topped with strawberries, or it was crushed to the consistency of dango—flaws abounded. Although this did give them a certain intriguing quality that I didn’t mind.

Naturally if I were to go to a proper restaurant I could enjoy something more palatable. But supposing someone not from Japan were to eat this and accept it as the flavor of real sushi, I think that would be a terrible shame. I wonder—might it be possible to better convey the true merit of Japanese cuisine?

Sushi is always listed first among candidates for traditional Japanese foods. Even I love sushi, but for that very reason I want to treat it with respect. I also want foreigners to come to know true sushi. But sushi is too complex. More important than what goes on the rice is the rice itself, and without exception, the rice in all of the sushi I have encountered overseas has been jammed into stiff lumps, the sight of which gives me a strong urge to shout that real sushi has rice that keeps its shape until it reaches your mouth, where it separates into its individual grains and leaves a faint, sweet aftertaste. The flavor changes entirely depending on the skills of the chef who forms it, and I think you would agree that once you start talking about such minutiae as these, sushi is not at all the sort of Japanese dish you can introduce in simple terms.

So in place of sushi, I pondered whether there might be a more easygoing, rustic sort of Japanese food steeped in culture and history, and my thinking led to the conclusion that onigiri is that food.

While I feel the full spectrum of onigiri is just as complex, it is still easier to approach than sushi. Hardly any Japanese prepare their own sushi at home, but I expect everyone, young and old, men and women alike, has made onigiri at least once. I also expect everyone has childhood memories of wolfing down mother’s homemade onigiri for lunch on a field trip or during Sports Day at school. Many, many years ago, when my brother, who is older than me by eight years, had a part-time job at a gas station, I always made three onigiri for him to take on his late-night shifts. As I recall I wasn’t able to form them into nice triangles and they came out looking like misshapen baseballs, but I remember feeling positively delighted to hear his compliments, which he always gave. I imagine everyone can point to onigiri as the first thing they made by hand before learning how to cook.

Anyone can make them. And the flavor is wonderful. Onigiri are amazing.

I think sushi and onigiri are alike in that shaping them by hand gives them that invisible secret ingredient of love. Though there is nothing fancy about onigiri, they have a mysterious goodness. Someone always makes them for someone else. Each and every one comes with a story. I wish I could tell more people of this soul of Japanese cuisine, with its traditions and roots in daily life, both within and beyond Japan’s borders. I couldn’t ask for more.