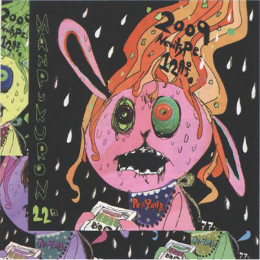 Translation Note: “Peyoung Sauce Yakisoba” is a product of Maruka Foods Corporation first sold in 1975. The name “peyoung” is a combination of the words “pair”, as it comes with two servings of instant yakisoba, and “young”, in reference to its trendy style. Along with being the first brand of instant yakisoba sold in a rectangular package, it was also the first to come with a liquid sauce (in contrast with the powder sauces of other products). [Source: Wikipedia]

This is the last “Thoughts on a Full Stomach” of the year.

Denoting something as “the last of the year” never fails to add a sudden hint of melancholy. When it’s “the last of the year”, a snow just like any other takes on the sort of beauty and transience of the climactic scene of a drama, and falls with an aura that reminds one of first loves and other memories. And so this is the last “Thoughts on a Full Stomach” of the year. How does that sound? Melancholy?

Still, I wonder why is it that the conclusion of something is so captivating. Graduations, moving, the end of a love, and the end of the year—those things which will soon vanish and draw to a close take on all the more sparkle in our eyes. Perhaps because when you realize that you can no longer go back, your thoughts turn to whether you missed sight of something important in that time you spent as though it would never end.

This is why around this time one tends to anxiously look back on the past year for any regrets. But my mind right now is the epitome of calm. I do not lie when I say that I have no regrets.

I released my “Windreader” album, into which I poured my heart and soul, and followed it with a tour. I put out my first concert DVD. I performed in the musical “Les Misérables” for the seventh year. My regular radio program entered its eighth year. This column has also had the good fortune to reach its second year. I participated in a Yōko Kanno concert at the Saitama Super Arena. As a voice actress, I played in “Kara no Kyōkai”, “Evangelion: 2.0”, “Final Fantasy XIII”, and other amazing productions. Also, I was able to take five entire weeks of vacation and travel through ten countries in Europe. The last single of my twenties, “Magic Number”, went on sale. And lastly, Peyoung.

You know, I really did not expect it to taste so good. It was the first Peyoung Sauce Yakisoba I had ever had. It had a flavor somewhat like high-quality candy. Mild, salty, slippery, puffy (of course I mean this in a good way), and truly delicious. I would definitely like to eat it again.

Yes, you read that correctly. Until now, I had never once tried that universally-known instant food called Peyoung Sauce Yakisoba. Instant noodles and their kin are not a part of my diet, and my dislike of yakisoba goes back to my childhood, when I would not even taste it when it was served in the school cafeteria. Thus Peyoung, which comes with a double serving of that which I despise, had no place in my life. So what, you ask, was responsible for this sudden awakening?

It happened at the beginning of the year, during the New Year’s holiday. While shopping in a convenience store, it occurred to me that I had yet to have the traditional first soba dish of the year, and for whatever reason, instead of soba I picked up a package of Peyoung.

In this, the last year of my twenties, my personal challenge has been to experience as many new things as I can. Peyoung was my momentous first step in that direction. To you who wish to point out that my first step was too small, I would say that actually, my taking this step in the first days of the year into the zone of the unknown and getting off to a fortuitous start from this stunningly delicious flavor was what brought such a generous helping of adventure and fulfillment to my 2009. Having lived 29 years, there exist flavors, sights, people, and sounds I have yet to discover…in infinite number! So I’m sure the rest of my life will be great fun! I’m full of these feelings of anticipation.