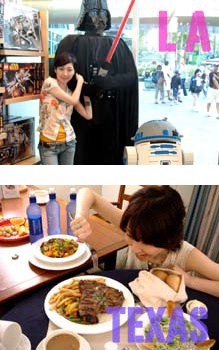 The other day I took a trip to Dallas, Texas, U.S.A. After my July trip to L.A., this was my second time to take part in an event overseas. The extremely warm reception from the American fans at both events pleased me to no end. I’m truly happy to know that my songs are finding their way across the ocean and into the ears of so many people.

In L.A. 5,000 people gathered to hear my music, and in Texas I could see the audience singing along with the Japanese lyrics, I bought some Texas-style western boots in my free time, and ate some great food……but while I have a lot of good memories, there was one event that stood out more than anything else.

One morning in Texas, while I was relaxing in the bath in my hotel room, I glimpsed something large and brown out of the corner of my eye. Right. One of those. Having just woken up, I hadn’t yet put in my contacts and couldn’t see well, but I could see well enough to know exactly what it was. It was one of those horrible creatures with swift legs and a penchant for bursting into flight. In other words, a cockroach.

But for a cockroach, it was monstrously huge. I imagine just saying, “It was huge!” to people won’t do much to convey how fearsome this particular one was, so I kind of wish I had taken a picture with a visual reference, like a pack of cigarettes or something.

Since I was in the middle of a bath, for the time being I threw on some clothes and went next door, where my director was staying. But like me, she couldn’t stand bugs and was no help at all, so next I tried my manager.

When we eased open the bathroom door, we found things as they were before, and that gargantuan cockroach of a size no one had ever seen was waiting there to greet us!!

At this point I took off for the back room, so my grasp of the situation was limited to what I could hear, but apparently my manager caught it with a paper cup! Or so we thought, because it wouldn’t fit!! It squeezed out! And darted off! It was gigantic!!!

Here we finally called the hotel security to handle our pest problem.

The man who showed up exclaimed, “Whoa, Texas size!” I guess even the locals think it’s abnormally big?!

He radioed back to the office first. “I’ve arrived at the site. Now proceeding with the extermination, over.” Then he eventually entered the bathroom with rolled-up newspaper in hand.

A series of loud whack!s and whap!s followed from the bathroom as he eliminated the bug. He gave us a kind smile before leaving.

Texas is not to be messed with!!