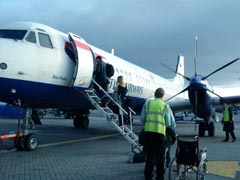 It was far colder than I thought it would be. The chill gave me a renewed longing for that parka I lost in London.

Our 7 a.m. flight from London landed in Glasgow, Scotland after about an hour. From there we changed planes and arrived in Stornoway after another hour. The second plane we took was rather small—the kind that flies with propellers. Stornoway is a small town on the Isle of Lewis, separated from the Scottish mainland by the ocean. We stepped from the plane into a barren landscape. Chris, our driver for the trip, came to meet us at the incredibly tiny airport.

We drove on the single road between nothing but sky and land. The only other things I could see were sheep, horses, and cows. It was frigid, and the wind fierce. With nothing to hold it back, the wind was free to whip about as it pleased. The horizon stretched forever, and the fickle weather produced rainbows often. I hear it’s not unusual to see multiple rainbows at one time. Sounds from quite far away carried clearly on the quiet air. I shivered in the cold, but I felt happy. The soup I had at a small lounge steeped my body in warmth and was especially delicious.

At five in the afternoon most stores in the town closed. But the light outside lasted like an arctic evening until around nine, which dulled my sense of time slightly. When we stepped in one of the few restaurants open at night, we attracted the stares of everyone there. Apparently Asians rarely come to this island. The next day, when we met with one of Chris’s friends on the Isle of Harris, he smiled at us and said, “The whole town’s been talking about you!”

Sheep are a more common sight here than people.

All the sheep do is eat profusely. They eat and sleep, wake up and eat again, and poop. There are sheep droppings everywhere. Chris said the average sheep lives for six years. He told me that shearing makes them weak, and shaves a little from their lifespans. I bought a scarf in this town yesterday made from that wool, shorn at the cost of shortening their lives. It’s warm—thank you; I’ll take good care of it.

On the island’s far shore, there was a red lighthouse standing on a cliff overlooking the sea. The wind was howling.

It occurred to me that the place I call home is on the opposite side of this round planet. But why is it that as I stand here on this desolate cliff that truly seems like the edge of the world, with the raging wind and huge sky about me, that which is dear to me strangely feels far closer than ever before, and I can sense its unmistakable feel? Though I had come so far, I felt as though I were enfolded by something very gentle. At the rim of this tiny village (perhaps even the rim of the Earth), I felt as though I could see to all corners of the world, and though I realize this expression may sound terribly egoistic, I really felt this way.

I had never felt so strongly convicted of the fact that I exist here. I had never pondered so deeply the fact that this is the Earth I’m standing on. The bond between me and the Earth, between me and the Universe—everything became simplified and easy to grasp. With the sky unfolding to its full size before my eyes for the first time, some things became tiny, some grand, and through that a different way of seeing the world began to take hold within me.

The miracle of being given life. Standing next to the lighthouse, the idea that I would now go from here to spread that thought to someone far away seemed to have a kind of substance to it.