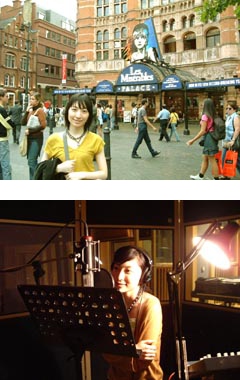 A 12 hour flight from Narita. A vague reminiscent feeling as I alight from the plane. My second time to London. As I gazed at the scenery from the taxi, it again occurred to me that I may just have fallen in love with this city.

After leaving my bags in the hotel, I went straight away to the theater. I saw the London version of “Les Misérables”. The musical’s greatness made for an exciting start of my UK trip right from day one. I grabbed some fish and chips to complete the tourist image.

Starting the following day I had zero time to go out, and I threw myself into work. Breakfast was at nine in the morning. Even though I almost never wake up this early or have a decent breakfast, I wonder why I feel hungry when I travel. Every day I was in the studio at 12. The musicians here assemble in the midday and break up at night. It’s a surprisingly healthy routine. But our normal start of 12 o’clock was rather on the early side, we sometimes couldn’t get started because of late arrivals, and going until morning was a matter of course.

Between recording tracks with the band right there and the gorgeous strains of the full strings section, every day was so much fun!! The work went so smoothly it was almost funny, and we got down everything that would form the album’s core. Borrowing from the deep sounds of London’s high voltages, the mics imbued with the spirit of rock, the light cascading from the high stained glass ceiling, and the power of English tea, my new album quickly grew and took on a clear definition. Everyone circle December 10 on your calendars.

From Steve, the engineer, to assistants Ben and Origa, everyone was super kind, so I felt right at home. When I struggled to speak in English, everyone sort of cheered me on. I bet I probably looked like a little kid in their eyes.

Along the way songwriter Tim stopped by. He just happened to be in London on a different job, so he came to say hi. We also had a visit from an Italian singer named Ilaria. She’s one of the artists participating in Yōko Kanno’s album, and though it was my first time to meet her we became great friends right away. We both spoke poor English, so our conversation went verrry slooowly. With so many people in one place it made things really lively.

The thing that stood out to me this time as I worked was that everyone was good at giving compliments. When they found something praiseworthy, they complimented that person directly with words. I found myself wondering if this is something we Japanese aren’t very good at. We tend to feel embarrassed and think words aren’t necessary to understand each other. But over here, if you don’t express your emotions through your attitude and speech, the other person will feel uneasy and wonder if you didn’t like something. So on this trip I used lots of complimentary English and took note of ways to express my feelings honestly.

Saying goodbye to Steve and everyone on the last day was hard. Everyone treated me so kindly. It was really fun to work together. I’m thankful for everything they did for me. I’m very much looking forward to the day we can meet again.

By the way, I did make one terrible mistake. I ended up forgetting my parka in a taxi. We called the company and were told we’d be lucky to find it before we left for home. Ahh, how stupid of me. London is still 80°F [27°C] and humid, so that doesn’t bother me, but after this we’re going to Scotland and that worries me a bit. I hear it’s cooler there than London.

Well, I’m off to Scotland. See you later.